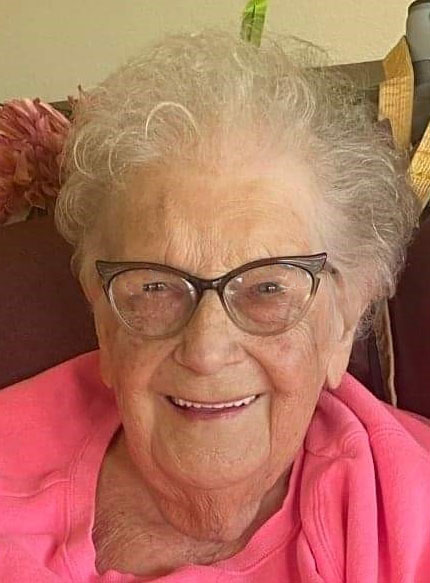 Jeannette W. Legler, age 98, of Brooklyn, passed away peacefully on May 25, 2022, at St. Mary's Care Center. She was born on November 1, 1923, in Rock Springs, WI, the daughter of August and Elva Klitzke. She was raised with 13 siblings on a farm in the Baraboo area, where they all attended a one-room country school. The family later moved and farmed in the New Glarus area where Jeannette attended school.

On October 11, 1941, she married Ivan M. Legler at First United Church of Christ in Belleville, WI. Jeannette and Ivan were blessed with six children on the family farm in Brooklyn. Spending time with family and friends, they shared their love for dancing by hosting many barn dances. They continued farming until Ivan passed in 1974.

She loved gardening, flowers, shopping, and going out for lunch with her daughters and granddaughters. She belonged to a mother's club, was active in 4-H, enjoyed playing cards, was on a bowling league, and enjoyed occasional trips to the casino. Staying active was her passion.

Jeannette was known for bringing family together every Sunday for her home-cooked meals, an inherited tradition from her mother. She gained a second family amongst the staff at the Care Center, who adored her sense of humor and stories about her life. Family continued to gather in her room every Sunday to keep the tradition alive. Jeannette absolutely loved her family and was so proud of them all!

She is further survived by her brother, Roy Klitzke; sister, Johanna Butts; and sisters-in-law, Syliva Klitzke and Rose Legler.

She was preceded in death by her husband, Ivan; grandson, Heath Aaron Salisbury; son-in-law, Ritchie Snyder; and granddaughter-in-law, Tonya Legler.

In addition, the family would like to sincerely thank all of the kind, loving staff at St. Mary's Care Center.

A private memorial will be held per Jeannette's request.

May she be free and at peace, united with those that were waiting with open arms.

She was a wonderful woman, enjoyed laughing, telling stories and limberger cheese. It was a great pleasure to have have known her.

The services for Jeannette have not yet been added. Please sign up below to be notified when the services are ready.

The attached photos are added to the memorial of Jeannette Winifred Legler to help share their legacy.

Thank you for sharing your memory of Jeannette