Jon (Mickey) Michael Hayes passed away at the VA Hospital in Madison, WI on February 28, 2021. He was born in Madison, Wi on August 14, 1940 to Harold "Habie" D. Hayes and Margaret "Monnie" (Mack) Hayes. He was the second born after Gail. After the death of his father, Monnie married James (Jim) M. Morgan. Jim and Monnie's family included Jon and Gail, Michael, Mary Kay (McWilliams), Susan (Lokken), and Robert.
As a young man, Jon served in US Navy for a short time. He married Annette L. DeGolier on November 14, 1970. In this union, he became stepfather to Greg and Gary Schneider. Together, Jon and Annette, had Sarrisa and Pedar Hayes. Jon and Annette were active in their local church family at Madison Gospel Tabernacle, now City Church. For many years, they attended services, taught Sunday school, and participated in their music ministry. He was involved in the acapella group, Glad Tidings and was part of many musical performances over the years.
Jon and his family enjoyed driving vacations to places like Arizona, Minnesota, Michigan, Texas, Canada, and local campgrounds. In his later years, he traveled to visit family in Hawaii and Kansas City. Being with his family was his favorite place to be.
In June of 1969 Jon began working at Kraemer Printing in the Binder Department. He ran the "Click-Clack Machine" also known as the Folder. He worked there his entire working career and retired in September of 2004 after 35 years.
After retirement, Jon sunk into many of his favorite hobbies and passions. Jon enjoyed music of all kinds. His book collection was full of history, wars of all nations, and non-fiction documentaries. Jon believed that those who do not know history are doomed to relive it. He was always good for a rousing conversation about current events and the state of the world. He loved high quality cigars and pipes. He had a special smell of pipe tobacco. He was a member of the local Smoke Club where he shared his knowledge of cigars and pipes with other enthusiasts. Jon had an extensive collection of movies and CD's. He was in a constant search to find movies that could challenge his self-built entertainment system. Jon's other favorite things were often sweet. He could always be found with a stash of Reece's Peanut Butter Cups, Peanut M&M's, Werther's Original, or other confections. His freezer was never without ice cream. His best friends and neighbors, Wayne, Gina, and Debbie made sure he was always fully stocked, often enjoyed pizza and movie nights with Jon, and made sure he had company for the holidays and special celebrations.
Jon has a large family. Jon is survived by his ex-wife Annette Hayes, son Pedar Hayes, daughter Sarrisa (David) Curry, three granddaughters, Olivia, Athena, and Sophia (Haley) and two step grandsons, Caiden and Ciaran (Curry). His stepsons Greg (Lee) Schneider and their children and Gary (Michelle) Schneider and their children. His stepsiblings Mary Kay McWilliams and Robert (Pauline) Morgan. His brother-in-law Paul (Gail) Pulvermacher, nephews Paul Jr, Brian, Phil, Bruce, and nieces Theresa Smith and Diane Baukin on the Pulvermacher side and Kimberly (tom) Binger, Chase, Hunter, Eric, Jeff, Melissa Morgan (Sam Gossfeild), Stephanie (Adam) Loose, and Andrea (Nicholas) Pottebaum on the Morgan side. Jon is survived by a handful of cousins on his mother and father's side.
Jon is preceded in death by his mother, Margaret (Mack) Morgan , father Harold Hayes, stepfather James Morgan, sister Gail (Paul) Pulvermacher, step siblings Susan and her husband Jerry Lokken, and Michael Morgan, Aunts Naomi (Sigrist) and her husband William, Ruth (Hayes), Uncle Elmer and his wife Marge Hayes and many cousins.
Jon lived a full life of shared experiences and instilled values of compassion, generosity, love, wonder, and devotion. Like all, he made mistakes and relied upon the gracious promises of God for forgiveness. His faith in God was passed along to his children and their children. His legacy will be one of finding beauty in all things, no matter how broken and damaged, stopping to smell the roses and finding the melody in any song, loving deeply with no reservation, seeking knowledge, defending the innocent and offering forgiveness to the guilty, and filling life with things that bring joy, whatever those things are.
He will be deeply missed. His memory will live on forever in the hearts of those who knew him. We are confident we will see him again in Heaven.
In lieu of Flowers or Gifts please consider donating to the local VFW Post 1318.
Online donation page: https://vfw1318.org/di/vfw/v2/default.asp?pid=79732
Or mail Donations to: 133 E. Lakeside St. Madison, WI 53711

We were 1st cousins and very close. So sad for the entire family. Will miss talking to you Mickey. Love you.LaNay

From one sailor to another, wishing you "fair winds and following seas". D. Marx

Beautiful writing. Will miss Mickey. Love to all. Cousin Merry

Sarrisa, I’m so sorry for you and Pedar’s loss. Wayne and I (Gina) will miss your Dad dearly. He had such a beautiful soul. There was nothing that he wouldn’t do for us. We will cherish in our hearts the wonderful times we had with him, and wishing we had more time to spend with him. God bless his beautiful soul. 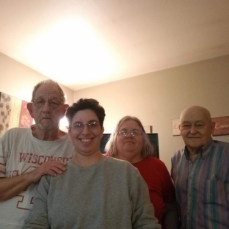 The services for Jon have not yet been added. Please sign up below to be notified when the services are ready.

The attached photos are added to the memorial of Jon M. Hayes to help share their legacy.

Thank you for sharing your memory of Jon